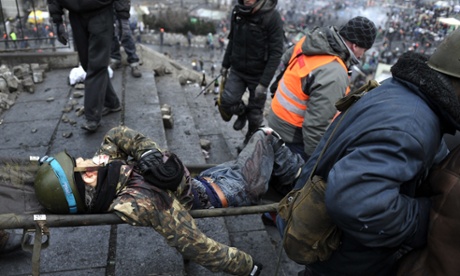 “I can’t believe the news today…” That’s the words U2 used to describe the Bloody Sunday shooting of civilians in 1972. They exactly describe my feelings when I watched international news this morning. In Kiev civilians are being shot on camera (but unfortunately  not only by that camera) for occupying the streets. It’s Syria at the border of Europe, but then without the religious backdrop. Flesh against hot copper, full metal jacket. Despite this negative lottery, in which your chances of ‘winning’ are considerable by comparison, people keep showing up for the protest. Obviously they feel they have nothing to lose. I am going to be blunt here. Is this the level of control Putin has now over the Ukrainian government? Is the meek reaction of Europe the level of economic dependency we have from Russia these days? I would suggest ‘Yes’ and ‘Yes’ to those questions but I must admit I am rather uninformed at the moment.

Still it’s no secret that the last Ukrainian leader that stood up against Russia has been in jail for several years now. It’s no secret Ukraine depends on Gasprom for its energy and that export contracts are the only way for Gasprom to make money (since domestically the bills remain unmet). There is no question that at least one assassination in Europe was carried out with polonium that could only have been made in Israel or Russia (and forensics traced it to a plane coming from Russia). In order to be effective, this polonium would have had to be made within days of using it, suggesting there is not clandestine way for non-governmentals to obtain it. Then there is the conventional military expenditure of Russia the likes of which the world hasn’t seen for some time. Does this all add up to a plan for expanding the zone of control into Europe; a plan for WWIII? Or are they just symptoms of an egomaniacal character without fixed goals other than self-gratification? If the first scenario is true, is Ukraine then the frontline of a conflict that could erupt at any time? Is that why our elected officials and less-elected European officials don’t seem to want to mention the elephant in the room? (For more background on the conflict between Europe and Russia)

History and reality (as history to come) has an enormous Schrödingers Cat –like problem. You have to open the box to see what you’ve got. You cannot be entirely sure however that answer wouldn’t have been different if you would have left the box alone. Europe today is betting on leaving the box alone in the hope that the cat is dead or at least that they would have better circumstances if the cat jumps from the box. The living cat in this case is a metaphor for an expansive Russia. This is a sane strategy since in ten years time all that military might may be technologically irrelevant, gas may have been replaced by better solarpanels and Putin may be dead from old age or the likes. But at the same time our fear for a living cat may allow the cat to defeat us in detail, Georgia first, then Ukraine and then a still largely divided Europe while keeping the USA offside. Maybe the cat would be easier to kill while still in the Box?

Al this talk about killing may seem somewhat unethical. But it is happening as we speak to people who’s only wish is what we have: the flawed, imperfect European democracy. Not a Stalin-worshipping Russian version that is one-sided media-controlled, aided by FSB mob-practices and hollowed out. Russian democracy is a Ford car, you can vote for whomever you like as long as Putin wins. Cry another tear of ‘unsuspected’ joy mr. President!

Mind you, I’m being very selfish here. If Ukraine falls and if Europe follows I, a democrat and a gay-rights supporting atheist stand not a snow-flake’s chance in hell. I may be The Silent Atheist, but I will not go quietly into that night. Ukraine may fall, but perhaps we shouldn’t let it. Since Budapest 1956 we haven’t seen a people as brave and deserving of their freedom. A people that deserves, if not freedom, at least a shout out. So put your hands up for Ukraine!

One thought on “Put Your Hands Up For Ukraine”